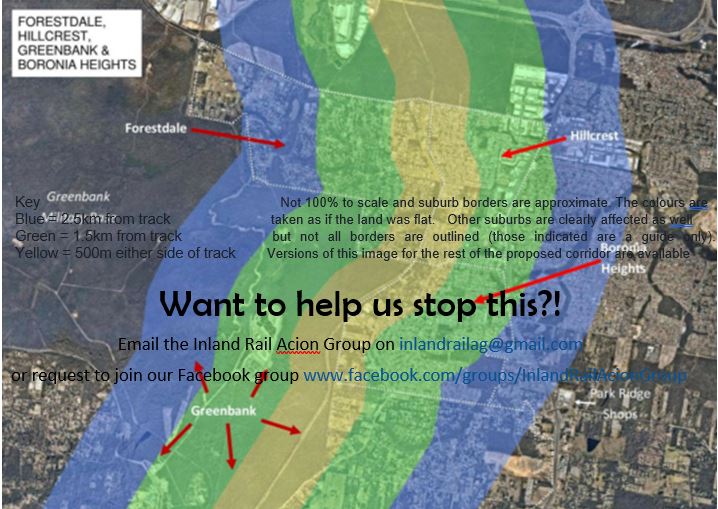 Not 100% to scale and suburb borders are approximate. The colours are taken as if the land was flat. Other suburbs are clearly affected as well but not all borders are outlined (those indicated are a guide only).

Want to help us stop this?!

Email the Inland Rail Acion Group on inlandrailag@gmail.com
or request to join our Facebook group www.facebook.com/groups/InlandRailAcionGroup

The ARTC proposal includes for initially 1.8km long trains eventually extending to 3.6km long trains. The frequency of trains will rise from initially 45 to between 55 ave to 64 max per day including a mix of 120 (plus). Queensland narrow gauge coal trains per week. These trains will be running through our suburbs 24 hours each day.

The proposed route from Acacia Ridge passes through high density populated well established suburban residential suburbs with approximately 50,000 plus residents and the suburb such as Greater Flagstone is continuing developing exceeding 230,000 residents by 2040.

ARTC have planned passing loops in Flagstone, Greenbank, Forestdale/Hillcrest and Algester within the suburban corridor with no consideration of the impact of multi diesel engines idling for extended periods and the impact these will have on adjacent residents. The noise and air impact of 1.8 to 3.6 km long trains stopping and accelerating from rest and passing within metres of established homes has not been considered.

Contrary to noise management, Inland Rail is actively planning to introduce and run large coal trains, freight trains andtrucks all on a 24-hour daily basis through the suburbs, in many cases within metres of established premises.

Air quality standards for particulates and photochemical smog already at times exceed recommended standards. One of the main focuses on air quality management in Brisbane has been to reduce diesel emissions from buses and from rail transport. Contrary to these air quality management plans, Inland Rail plans to introduce very significant diesel emissions from large fleets of extra trains and extra B-Double trucks specifically to worsen air quality throughout Brisbane and neighbouring areas.

There is a potential for an extra 5,000 short haul diesel trucks daily to and from Acacia Ridge all impacting on already heavily congested city roads. ARTC are only now doing studies of the impact of this  refuses to release its estimation of trucks required to tranship its cargo to and from Acacia Ridge, The 5,000 figure is based on Inland Rail's own estimation of one freight train being equivalent to 110 B-Double trucks; at 45 trains every 24 hours.

In order of priority we the residents of the communities between Kagaru and Acacia Ridge request:

1) ARTC and the Federal and State Governments reconsider the final route of the Inland Rail between Toowoomba and Brisbane and review the advantages of an alternate route from Toowoomba to Gladstone, and change ARTC scope of work to investigate Gladstone.

2) If against all considerations the proposed route to Kagaru and Acacia Ridge proceeds, the flawed political decision to divert Queensland coal trains onto the ARTC freight line is to be revised and is not to proceed and the coal trains remain on their existing freight rail line to the Port of Brisbane.

3) If against all considerations the proposed route to Kagaru and Acacia Ridge proceeds, the freight line is to be ‘invisible’ to residents by using a ‘cut and cover’ construction method to remove all potential health issues associated with existing and future suburbs and residents.

4) The concerns of landowners including private property, farmers and livestock owners from the NSW border toIRAG Alternative – Gladstone Port Not Brisbane Port  Gowrie and from Gowrie to Acacia Ridge with regard to land resumptions, flooding and train traffic passing over their land will be removed.

5) Design problems associated with passage over floodplains including unknown expenditure to overcome unknown final design and construction solutions and increased expenditure will be removed.

7) The alternative provides connection at Toowoomba to a local international airport for overseas and interstate.

8) Although not confirmed in writing ARTC have previously stated that the estimated cost for design and construction of the 8.5km’s of range crossing tunnels could exceed 6 Billion dollars. The reallocation of federally Infrastructure Corridor State Development Area) as a dual gauge railway connecting Wandoan (230km north- funded monies to the missing southern link railway which was estimated to be only 1 Billion dollars will result in a significant saving of taxpayer dollars.

9) The completion of the missing southern link railway will provide many benefits to inland Queensland by connecting many agricultural facilities. The IRAG alternative described above, as well as providing many advantages to Brisbane and Logan cities by becoming coal free cities and removing the movement of open coal wagons and heavy freight trains through densely populated suburbs with associated health issues also fulfills the agenda of the ARTC Inland Rail service offering.

The IRAG alternative described complies with the ARTC Inland Rail objective for the provision of a new rail freight connection between Melbourne and Brisbane by utilising existing road and rail connections between Dalby/Toowoomba and Brisbane Acacia Ridge and Brisbane goods distribution centres. In addition, the existing rail link connection to the Port of Brisbane is retained for export containers transported via the current rail link if required. The cost of this alternative to taxpayers will be considerably less than the combined federally allocated funds and PPP for the current Inland Rail scope of work. The future income to the Queensland state from export cargo royalties in addition to the wealth generated from a Queensland owned port should by itself provide a reason to seriously consider this proposal.